A lady likes to be complimented on her looks, her eyes, her figure.

But the personality comments are much appreciated.

As my little lady's first birthday approached, I poured over Pinterest for ideas for her first birthday cake smash photo shoot.  It's been warm here, so I was positive I wanted an outdoor photo shoot and I just loved the idea of a vintage teepee type shoot with some fresh flowers.  I found a tutorial and what luck! All the supplies to make the teepee were in my garage!

Unfortunately, I might be artistic and creative and I thought I had worked out how to make the teepee with the old curtains and wood I had, but I lack the crafty skills to really make it work and the teepee was a bust.  I basically need some glue to hold it together, so I'm not giving up, but it is on the back burner for the moment.  I just didn't have time to get it finished before her birthday arrived.

Another issue was that a cold front rolled in the night before her birthday, shoving out all the nice warm air and dropping the high temp from 78 to 54 on her birthday, making it too cool for the pretty, lacy dress I picked out for her to wear. However, I already bought her cake for the smashing and the fresh flowers, so I would not be deterred!  An indoor studio shoot it would be!

I set up my white backdrop and lights in the den where I have the most room to work and decided to keep things minimal and just have a few things with her.  I had a little crown lace headband for her to wear, but she pulled it off and it wasn't worth fighting with her over it. She loved playing with some of my necklaces and I grabbed an decorative urn from a shelf that I thought she might like to look at and would hopefully keep her from crawling away.  I did have to put her back on the backdrop a few times before I gave her the cake. I wanted to get some portrait shots before the cake got everywhere.  The best part was when she stood and got so excited about it!  She's not walking yet, so this is huge for her.

I expected her to dive in and make a mess when I gave her the cake.  That didn't happen.  She just picked at it and didn't seem to want to get her hands dirty.  At one point she put one foot up on the cake stand.  I was surprised that it didn't tip over.  I tried to show her what to do by grabbing a bit for myself, but she just wasn't as excited as I thought she'd be.  Maybe it was too close to her naptime or maybe she's just like her brother, who also just picked at his cake and didn't really smash it.  In any case, it was a fun little shoot! 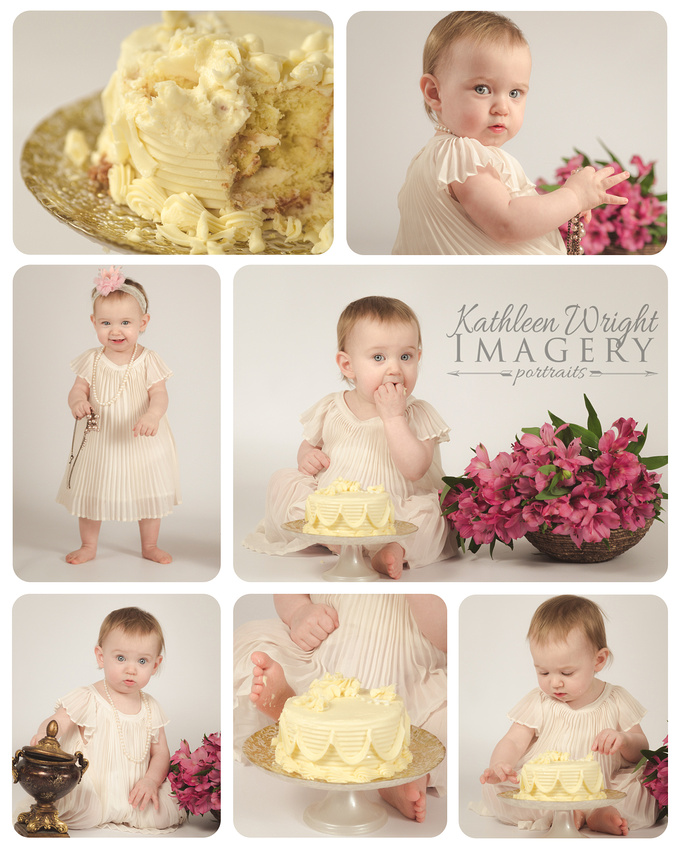