Art is not what you see, but what you make others see.

Artists sometimes get caught up in what defines them and sticks to their "style".  I like to have fun with my art, so when my son asked for an image of him riding a dragon with a volcano, I knew it was going to be a blast to make.  Here is the final piece: 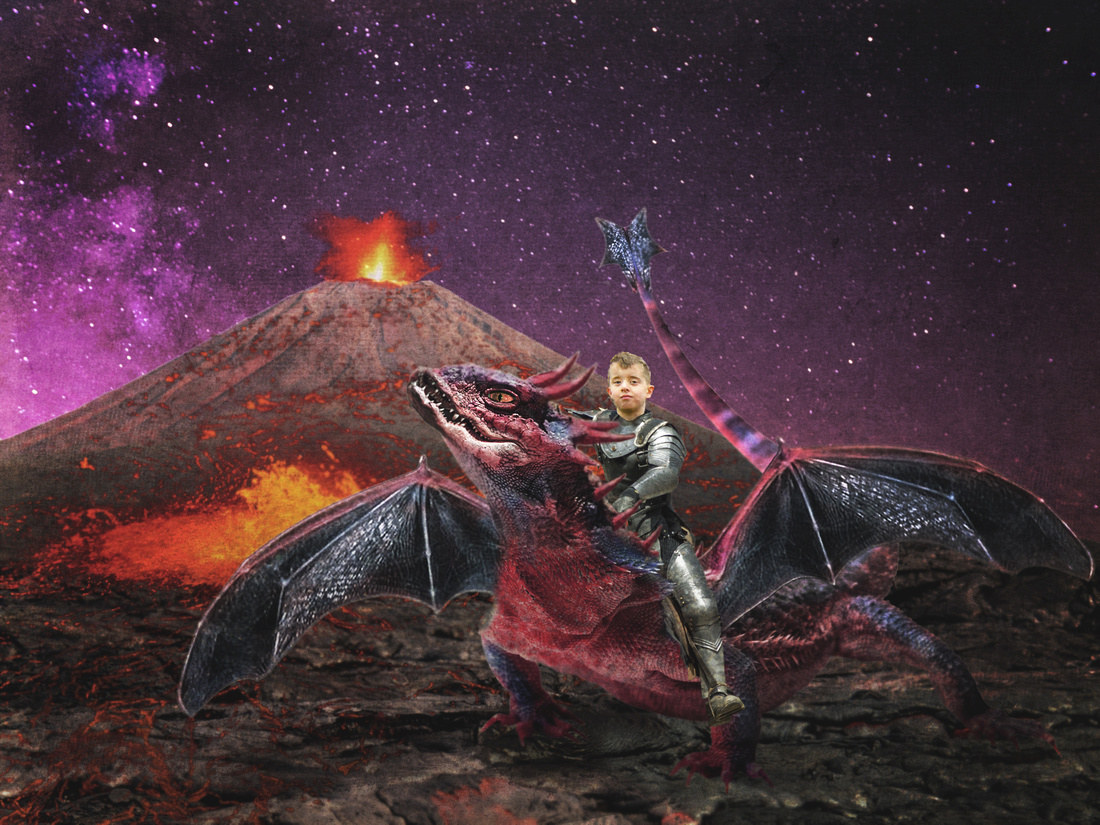 I spent a good 8 hours creating this piece, so I thought I might share with you my process on how I make something like this.  First, I have to have the concept of what I'm looking to do - my son gave me his ideas so from there I knew I would need some volcano images.  I went to Pixabay where I knew I could find stock images that I wouldn't need to provide credit back for (it can be hard to keep up with all the people who want links back to their artwork and I've provided free stock out to people and not required anything like that so I like to work with artists who are like me and don't mind collaborating for the greater good of art itself). I first did a search on volcanos and collected images that I thought would be useful for the fiery aspect of the piece - I used this one and this one.  I orignally wanted to use this image for the backdrop, but the quality was too low, so I used this one instead.  I decided to use this image for the foreground to keep it looking like a fresh lava flow area.  The angle and focal length seemed like a good match with the background and I blended them together with a lower opacity black brush on the foreground layer. This is what the two layers together looked like: 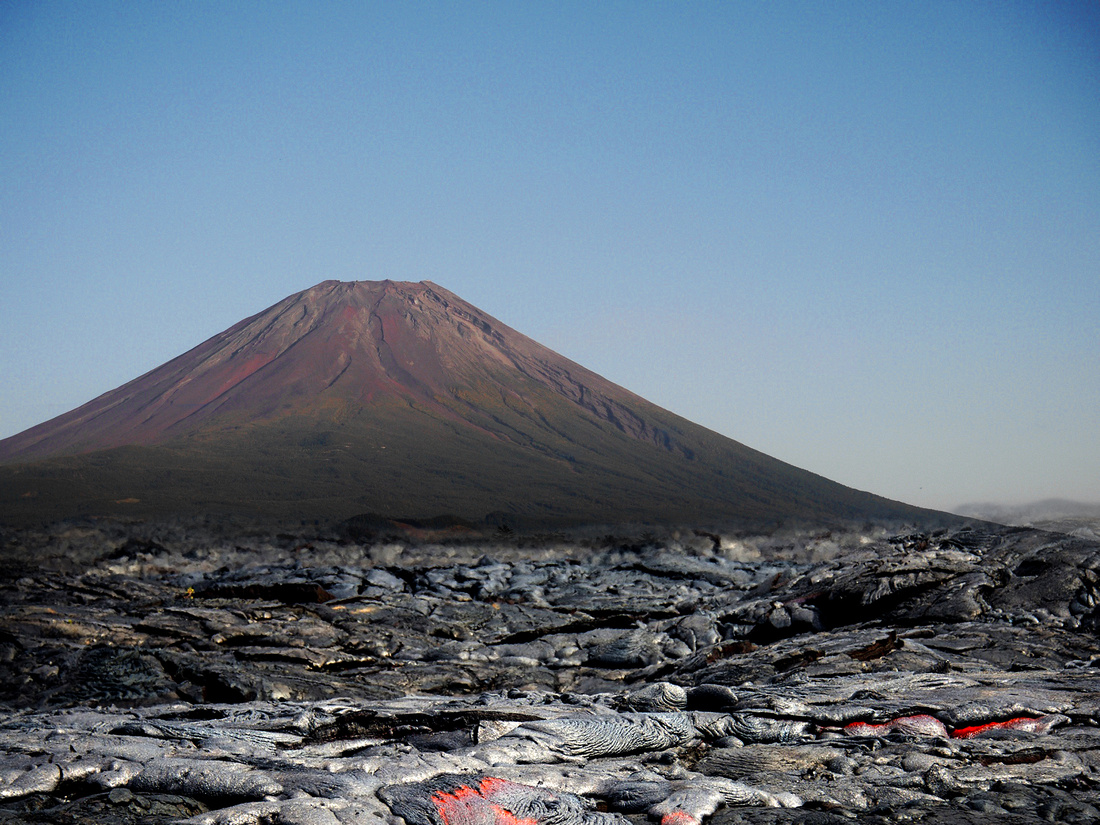 Next I let my son look at the selection of dragons on Pixabay to choose the one he liked.  This one was already a PNG, which made dropping it into a new layer on the foreground easy - I also flipped it horizontally because I wanted it facing the volcano where I knew I wanted my light in the image to come from.  My volcano lava flows I had to create a second background layer, select the black color, delete and then reverse the selection to get the lava areas without taking too much time to select the tiny parts of the lava.  This is what it looked like after these steps: 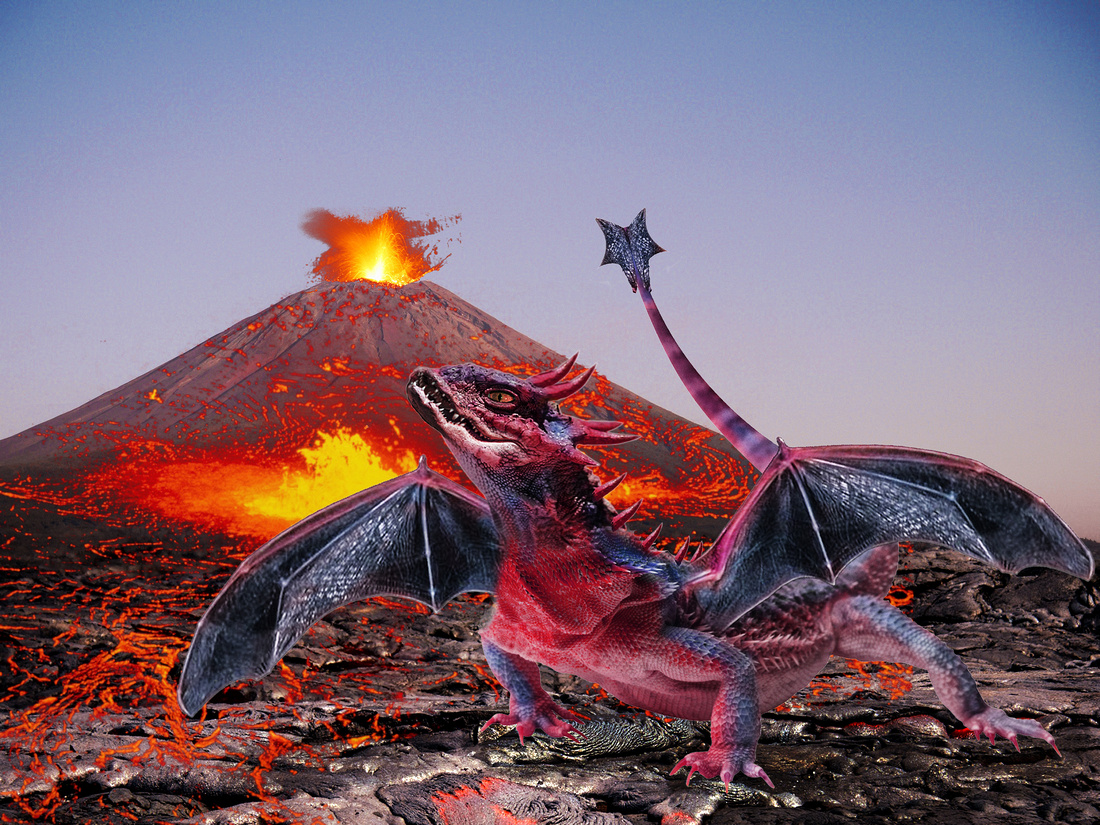 From here it was a little tricky to find a picture of my son that would work.  With the spikes on the dragon's back I couldn't just drop him onto it.  So I thought a knight would be a good idea - they have thick armor to protect them so it would make sense.  But there just weren't any knight images on Pixabay or any other CC0 sites that would work.  Then I thought back to the times I've gone to the Georgia Renaissance Festival  and taken photos of the knight jousting there.  It's been a few years, so I had to go into one of my archive hard drives to find one, but this image worked perfectly: 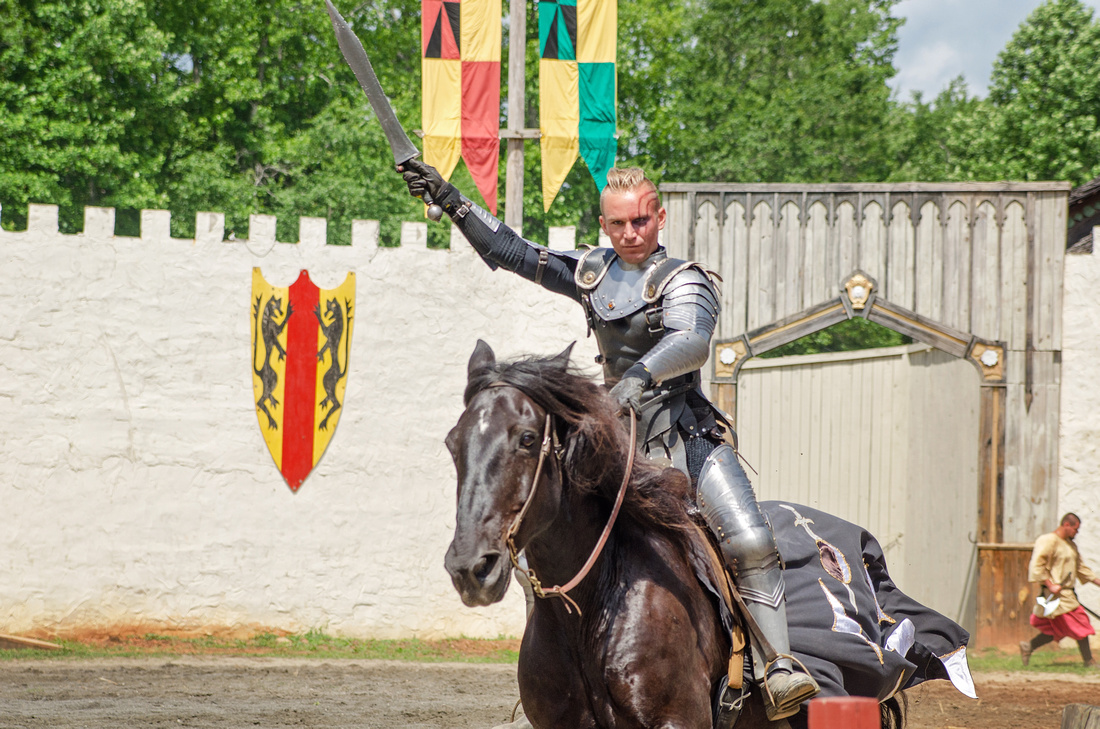 So I cut out the body and put it on the dragon and then on a mask layer I went in and erased out the arm that was raised because it didn't look right to me with the dragon's head in front of it and I carefully cut out the spikes on the knight's body so he would blend better with the dragon.  I left the stirrups because, really, who would ride a dragon without a saddle? I then went back to find a photo of my son where the lighting would match the dragon and the knight and also make him look kind of cool.  I had this shot of him giving me attitude when we were out together in January and I thought it was perfect. 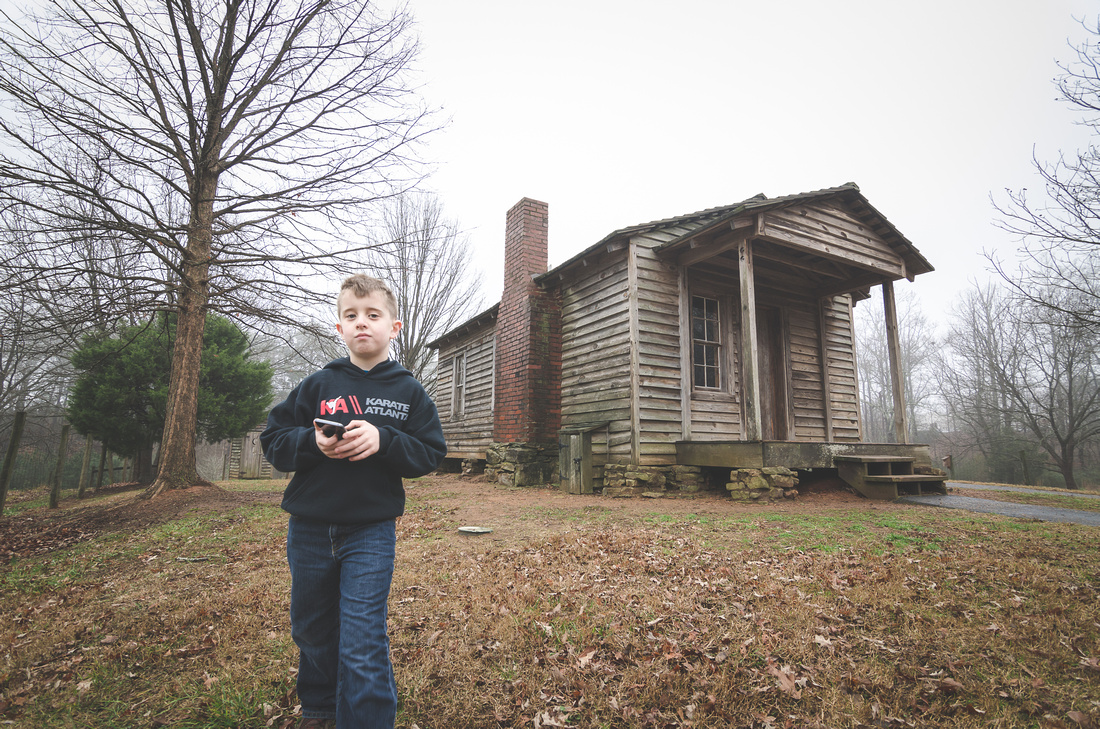 After I had them together I did a lot of blending with a blur brush and dodging and burning the various elements to get the lighting closer together.  I added a light layer to send more light coming from the left side of the image. I added the starry background with it clipping to a copy of the mountain background.  I liked the idea of it being the middle of the night with an off frame moon giving light in addition to the lava flow.  I added a few texture layers - a glitter one set to divide blend mode to give texture just at the bottom and one that gave texture across the frame.  This is what it looked like when I went to bed Sunday night: 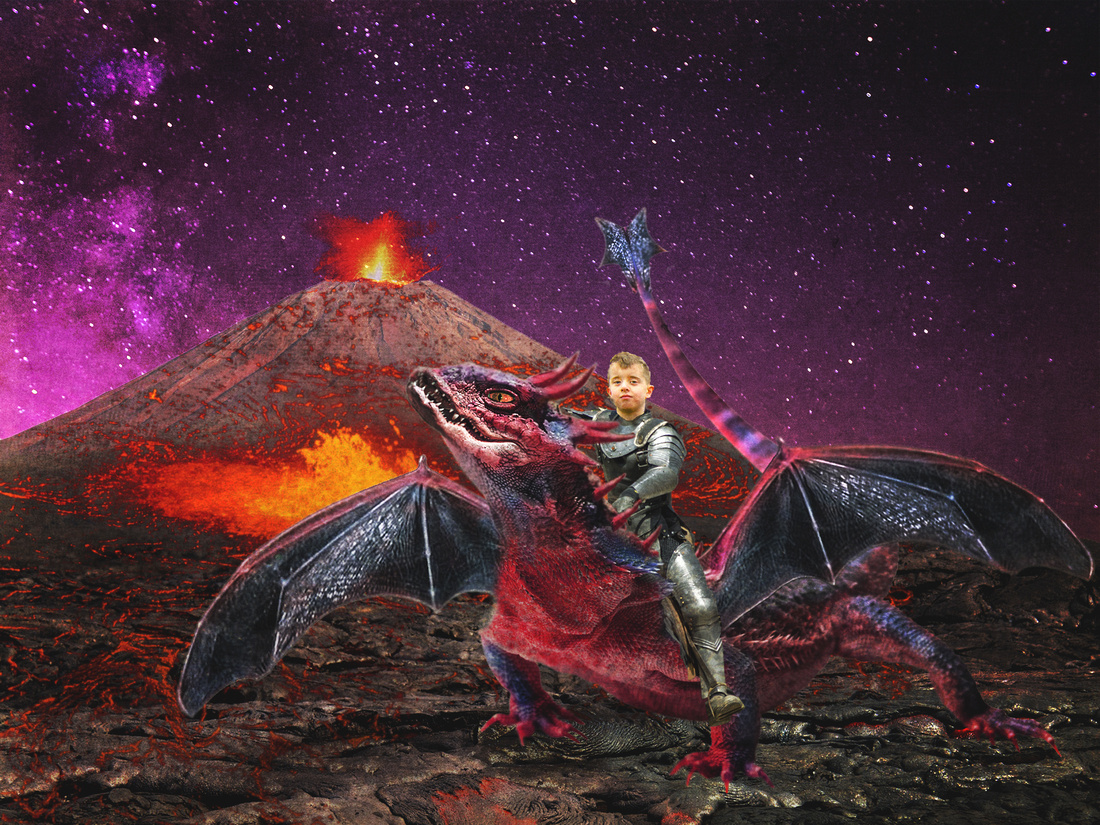 The next day I took a fresh look at it and decided to adjust the lava layer so that the pool of lava would be more level and I reduced the saturation a bit because I don't like over saturated images in general and they also don't print very well.  So that's basically it. There are a lot of little steps and there were a lot of textures and other elements I tried that I just didn't like in the image so I didn't end up using them, but the end result my son loved, so I call it a success!